Italy has always had a special place in my heart. It was where my parents took me for my first trip abroad when I was 9 as a First Communion Present. It was a long trip from Poland and as we drove, we stopped in different cities across the country starting with Turin, Padua through Assisi and ending in Rome. At least that is what my memory from 20 years ago tells me. What else does it tell me? That I saw Pope John Paul II, threw a coin into The Trevi Fountain with a wish to come back to Italy, ate lots of pizza and gelato. Ah yes, Italian cuisine…about that later.

Angie and Russ’ Wedding was the reason I happily made it back to Italy for the fourth time after 10 years of absence. Who would resist going to a destination wedding in one of the most romantic cities in the world? In fact, Angie and Russ got engaged in Rome and decided to seal their love in the eternal city. How romantic is that?! The ceremony and the reception was held in a historical estate just outside of Rome, Villa Il Cardinale, that dates back to the 1st century. The villa itself was built in the 16th century and absolutely took my breath away. The architecture, the decor, the smell of history made me feel like I was in a movie. But it’s really the ancient ruins surrounding it what make it a magical place especially for a ceremony like this.

We all know that Italian cuisine is one of a kind. Having worked at an authentic Italian restaurant owned by a family which was deeply rooted in its Bolognese tradition, I know that it’s not only about spaghetti, lasagna or pizza. Italian kitchen is all about art, tradition and celebration: the art of mixing the right but simple ingredients to create extraordinary flavors, the tradition of making homemade pasta and aging perfectly tasting Parmigiano Reggiano, and celebrating it all with a glass of delicious Sangiovese.

I wouldn’t expect anything less from a wedding in Italy. However, what I did not expect having never attended one, was the amount of food that would be served. I always thought that Polish weddings were overflowing with food while American ones had a scarcity of it and you could easily walk out from them hungry. But the difference between Polish and Italian way of serving food is that at a Polish wedding you come and go to/from the table throughout the night as you please because the dishes are being served throughout the night. At an Italian wedding you have a sit down 25 course 3 hour dinner after which you fall into food coma and have no energy to move on the dance floor. Ok…maybe not 25 but it felt like it. You also have no way of getting drunk either due to the heavy carbs filled (delicious) meals which can be good for people who cannot handle their alcohol.

The reception started with an obligatory glass of champagne and a long table of appetizers that included: Oysters, Shrimp Cocktail, Buffalo Mozarella, Parmiggiano Reggiano Cheese, Parma Ham, and Fried Calamari amongst others. Because I was starving by that time, I devoured enough to call it a full meal. Mistake. From there, all guests were seated down at a beautifully decorated long table where, next to my name tag, I found a full course dinner menu: 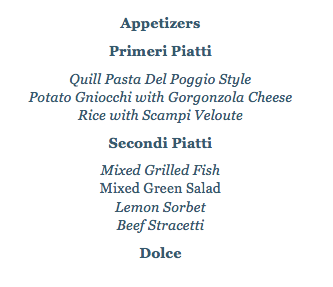 My first thought was: “How am I going to choose one dish from Primeri and Secondi if it all looks so good?” Quickly enough, I realized that I won’t have to choose when, without being asked, I received the first plate – Pasta. Oh my…heaven on earth. I couldn’t stop eating despite telling myself “slow down, there are 5 more courses coming.” My favorite though, were gnocchi with gorgonzola cheese and walnuts, a dish to die for. By the fourth meal, I lost my ability to eat another bite, which was unfortunate because I really wanted to try the Beef Stracetti but after sipping on Lemon Sorbet, which is to clean your palate, I said “enough.” However, it wouldn’t have been a full meal if I didn’t have a bite of dolce from a sweet corner, which I miraculously managed to fit in two hours later.

The rest of the night was spent on sipping Italian wine or hand crafted cocktails and dancing the night away. The wedding was chic, romantic and classy and I wanted it to never end. I wish all the best to the lovely newlywed couple in their new life together!